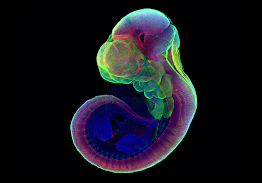 In the article, “Lab-Grown Mouse Embryos Form Limbs and Organs'' scientists had managed to develop a method that would allow them to grow a mouse embryo outside its mothers uterus. Traditionally when studying the embryonic development of a species; which had allowed scientists to understand how a single cell would develop into a body with specific cell types. To see how fetal development occurs and what important features are present during  different stages surgical images were taken from cutting into the womb of the mouse. This time however scientists were able to artificially create a womb which allowed them to  analyze the gestation of the embryo in real time without having to cut into the womb.

Having the right conditions to grow the embryo was important to maintain proper functionality and development. Conditions such as the right amount of pressure, oxygen, and nutrients were vital to sustain the embryos genetic material and even managed to get the embryo to develop functioning systems like the heart beating, limb buds, a digestive, auditory and visual system. The lab only managed to keep the mouse alive for 11 out of the 20 day gestation period needed to have a fully developed mouse. This was due to the fact that there still needed to be more advancement in how to supply an artificial bloodline that would more directly aid in the fetus development. Not only has this research produced altering discoveries it has foreshadowed the probability to grow a human embryo outside of the womb as well. Such reasons to do so are important when considering the genetic factors. These genetic factors look at the embryos modes of inheritance and susceptibility of certain conditions based on if it is sex-linked or autosomal dominant or recessive.The reason to even consider growing a human in an artificial womb is to be able to detect any birth defects and diseases that could endanger the developing human embryo. Until then more research will need to be done.

Posted by Ashley Villavicencuo at 8:24 PM