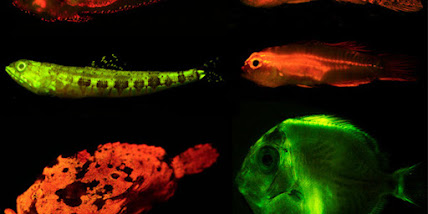 Recently, scientists have discovered biofluorescent fish in the Arctic, according to this article. The ability to convert blue wavelengths into green, red or yellow light could be used to identify certain behaviors such as communication/mating. Some fish, such as scorpionfishes and flatfishes do not fluoresce in cold water, but do glow brightly in tropical and temperate regions. This article explains how these fish produce light, which is by an enzyme reaction between a protein, luciferin and an enzyme called luciferase that results in the emission of a photon. Scientists are now focusing on determining the function of fluorescence in various fish groups.