The herb cilantro has had a split reputation amongst cooks and gastronomical connoisseurs as it gained prevalence. Some people claim that the plant has a soapy after taste or even compared the taste to dead insects. Others rave about cilantro as an aromatic decoration that is full of antioxidants and a must in several cuisines, including Mexican , Thai, Chinese and even Italian. The clue may lie in the taster, not in the plant.

Cilantro is full of aldehydes, chemical compounds made of a carbon, an oxygen, a hydrogen and a different atom . One of the genes in our tastebuds, OR6A2 has been identified as particularly sensitive to aldehydes. That gene could have come up as part of an early defense mechanism to warn of poisonous plants before they are chewed up and digested. Another substance that shares its amount of aldehydes is soap. People that dislike cilantro often share the gene OR6A2, but there could also be environmental factors at play here.

Most people would recommend crushing the cilantro before adding it to foods. Some people have managed to enjoy cilantro, regardless of having the OR6A2 gene. It is telling that people can find ways around their genetics for the sake of taste.

This article and photo source. 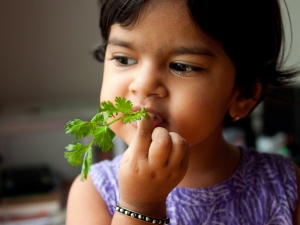