Article: ¨The FDA has approved the first drug to treat the rapid-aging disease progeria¨ 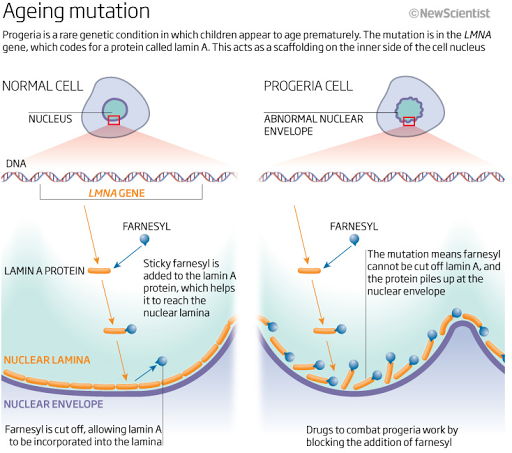 A rare genetic disorder in children known as Hutchinson-Gilford progeria syndrome or most commonly known as progeria for short. Has shorter the lifespan of children before they turn 15. This new drug approved by the FDA is the first and although not a treatment for the disorder it does show promise to lengthen the child's lifespan. Children with this disorder have a mutation in their genes where defective amounts of progerin. Similar to Lamin A which holds the nucleus together, progerin attaches to the cell membrane and isn't being recycled for fresh proteins and so premature aging occurs. Symptoms of the disorder typically begin to show two years after birth, with the loss of hair, body fat, joint stiffness, cardiovascular disease etc. The medication that has been produced blocks some of the progerin, lowering the amount in the cells. The new drug is called Zokinvy and it was produced by Eiger Biopharmaceuticals of Palo Alto California. Since its gotten approval by the FDA, further research is being done with other medication so that there's a  possibility to continue lengthening the lifespan of these children with the ultimate goal of resolving the mutation. With only a few cases in the world, the importance to find treatments that could lengthen a child's life is not only primal for this disorder but it represents that there is headway for this illness and many others like it.

Posted by Ashley Villavicencuo at 10:02 PM