CRISPR is a tool that allows for the direct editing of our genes. Although used heavily in biotechnology and medicine, it originates in nature, functioning as a microbial immune system. Found mostly in Bacteria and Archaea, it is able to store viral DNA into its genome allowing it to quickly respond to previously encountered viruses.

It was found that the part of CRISPR responsible for incorporating viral DNA into a microorganism's genome might have originated from a gene that encodes toxins. This can give reason to why toxins exist in CRISPR-Cas genes, they were integrated and adapted over time.

An Archaea named Sulfolobus islandicus lives in a very unattractive climate but still has enemies that poke holes into cells and inject there viral DNA. These Archaea developed a CRISPR-Cas defense which stores small parts of the viral DNA into its genome.

The Virus developed a protein that blocks CRISPR response. Researchers have been able to witness the proteins bind to CRISPR. 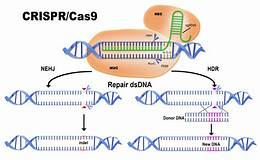