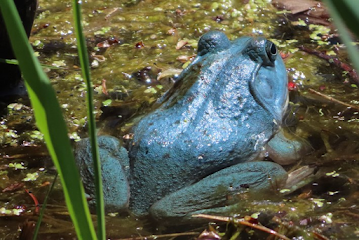 We all know that most frogs come in a green color or a brown color, not to mention frogs are found all over the world. This frog that was found in Indiana in a residents pond. This specific color is due to a genetic condition called axanthism. This genetic condition is very rare to find in the wildlife, in which is widespread through other amphibians. The color for frog's skin comes from an combination of skin derived underlayer called structural color which is blue. As well as color from the neural crest located on the spine of the frog that gives rise to pigment cells. That neural crest produces xanthophores which is yellow pigment. In a normal frog the yellow pigment created from the neural crest is spread through out the body and combined with the blue pigment which will make the green color we all know. However, frogs afflicted with axanthism which have an absent of a neural crest does not produce the yellow pigment to merge with the blue, the phenotype that is expressed is the blue structural color. I found this interesting because when you think of frogs you believe them to be green. Finding one like this is very rare and is a site to see. I had an idea to do this article after viewing a YouTube video and it was very interesting.

Posted by Nicolas Rivera at 5:33 PM