How tardigrades protect their DNA to defy death 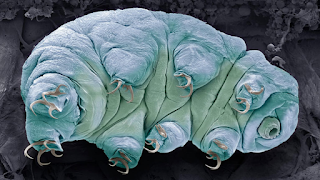 Certain species of tardigrades can survive doses of radiation up to 1,000 times that which would kill a human. They owe their ability to do this partly due to their molecular equivalent of cotton candy which allows them to be able to survive outer space. They can survive just about anything including x-rays, cosmic rays, or being doused in hydrogen peroxide.

It is very interesting to see that radiation and chemical exposure result in production of DNA-damaging hydroxyl radicals, molecules composed of oxygen and hydrogen. The cloud it forms similar to cotton candy keeps hydroxyl radicals away from DNA. Although more research is needed, it is interesting to see that researchers don't know yet whether the human proteins also form a similar shield against DNA-damaging chemicals.
Posted by Sara Amoussi at 11:51 PM