Seahorses are unique sea creatures with several oddities such as lacking caudal and pelvic fins, possessing tubular mouths with no teeth, having a body covered with bony plates, grasping tails to latch onto various sea grasses and coral, and the males having a brood pouch to give birth to offspring. Sequencing of the tiger tail seahorse genome was performed using the de novo assembly, the same method used to sequence the Giant Panda genome. The genome and traits of the seahorse was also compared to close relatives such as the pipefish and seadragons. 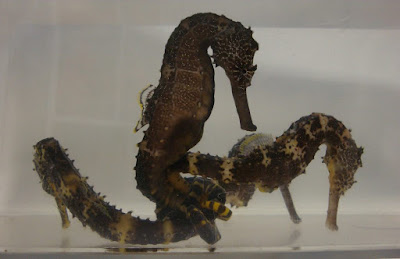 The seahorse lacks genes called "P/Q-rich SCPP", which allow minerals to collect and form teeth. Since the seahorse lacks this gene, it is likely their tubular mouths formed as a result of being toothless. Seahorses are also missing the gene that is involved in the development of pelvic fins in other fish and legs in humans. This gene, called tbx4, functions in telling the embryo to grow hind limbs or pelvic fins in fish. To make up for the lack of pelvic fins, seahorses swim by beating a small fin on their back rapidly and relying on tiny pectoral fins near the back of their heads to help them steer.

Although finding a lack of certain genes help explain some of the seahorse's unique biology, the exact ability for males to give birth is still unknown. The study was able to find a large number of genes in the male brood pouch under the family astacin metalloproteases. These genes are responsible for embryo hatching and are present in other fish. An evolutionary biologist who was not a part of the study, Kenyon Mobley, states that the genome alone cannot explain the transition of birth responsibility to males from females. However, he said it was possible that paternal care was the byproduct of losing another trait rather than a critical step during evolution.

I find this study to be very interesting, especially since the same technique used to sequence the Giant Panda genome was replicated on the seahorse. Also, seahorses are very unique creatures that have been around for millions of years. By uncovering the genome and looking at the genes the creature does or does not possess, we are able to learn more about the evolutionary biology of seahorses and how they have adapted to survive to this day. I can't wait to see the de novo assembly technique being used more in the future as we sequence the genomes of other species inhabiting our planet.