The article, “Mission Impossible? Maker of Plant-Based Burger Struggles to Meet Chains’ Demand”, by Neil Vigdor is about the impossible burger made by Impossible Foods in California. These burgers are known as impossible because they are not actually made of meat; however, they seem to resemble meat very closely. They taste like, cook like, and look like meat. They have been sold to White Castle and Red Robin, two famous chains. The demand for the burger has increased dramatically since its introduction. Vegans and vegetarians are the main target group, because this is a food item they are not able to regularly enjoy. Even some carnivores are interested. 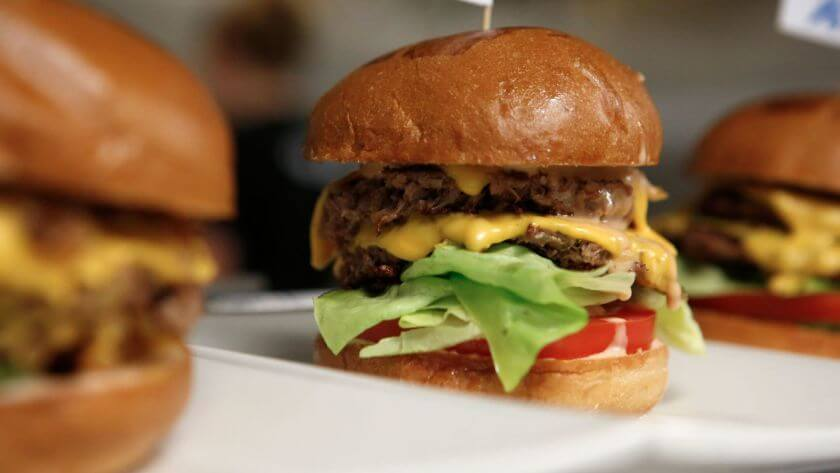 Above is a picture of the impossible burger. It appears to look the same as a regular burger.

Because the burger has been such a success, the company now has a much higher demand. Some restaurants even want to use other impossible foods as meat substitutes in lasagna, tacos, and a slider version of the burger. The company will have to hire more to keep up.
The most interesting part of the impossible burger is what it is actually made of. The “meat” is technically a GMO. The patties are made out of genetically engineered, soy based hemp protein. The article, “The ‘magic mix’ of ingredients responsible for the Impossible Burger’s taste and texture”, by Ricki Lewis offers more insight. The ingredient is known as soy leghemoglobin. When the burger is cooked, it reacts to produce heme which is what makes it turn red like meat.
Unfortunately, the article by Lewis explains an unfortunate problem. As Vigdor mentioned, the demand for the impossible burger is very high. There is not enough land for soybeans in the United States to meet the demand that has been projected. Luckily, genetics is to the rescue. Through recombinant DNA technology, the soybean protein can be made in the cells of another species. It could be made in one that is easier than growing acres of soybeans to acquire it. Researchers have been able to put the gene that encodes for legHB into the genome of a single, complex celled fungus known as Picchia pastoris. This would allow the company to keep up with the demand.
One of the problems with the burger not concerning the high demand is the controversy over GMOS. The second article offered more insight. Rather than yes or no, it appears to be both. The legHB protein is identical to the protein from soybean root nodules but the yeast used to make it would be genetically modified.


I found this topic extremely interesting, because I am a vegetarian myself. I have not tried this burger, but I have had the beyond burger. I think that a plant based diet is a much more sustainable, and environmentally friendly way to live. However, I know it is not for everyone. The impossible burger offers a plant based version that still tastes like meat. While I have my own reservations about GMOS, I think genetics and using recombinant DNA to keep up with these demands is part of the answer to the environmental and food crises.