In their experiment, tumor prone fruitflies produced more Defensin than normal fruit flies. Defensin is a protein that interacts with dying tumor cells in animal cells. By shutting down Defensin in the tumor prone animals, tumor cells begin to grow. This suggests that Defensin is actively killing cancer cells while sparing healthy cells. By using the fly version of Tumor Necrosis Factor, Parvy shows that this factor helps flag tumor cells for destruction and makes the cells more sensitive to Defensin's attack. It does this by bringing a protein called phosphatidylserine to the surface of the tumor cells. Defensin binds to these sites and terminates the cell.


An antimicrobial agent called Defensin kills tumor cells and shrinks tumor size in fruit flies, with help from a pathway that flags the cells for destruction.

Recent studies published in, eLife, show that there is the first evidence in live animals that antimicrobial peptides, AMps, which help protect against infection, can also defend against cancer! 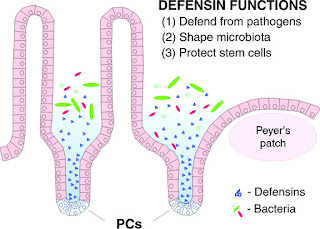 Lead author, Jean-Philippe Parvy, a postdoctoral fellow at Cancer Reseach UK's Beatson Institute in Glasgow states that, "We used the fruit fly Drosophila melanogaster to investigate whether the machinery that is best known for its role in the recognition and elimination of harmful microbes is also capable of recognizing malignant cells in a living organism and eliminating them in a similar manner".

Parvy's work could be instrumental to future treatments for cancer within humans if given more time. I believe that if scientists can use Defensin to target human Tumor Necrosis Factor, then a cure for cancer may be in the near future. Converting Defensin to a treatment suitable for humans is the next hurdle that scientists need to jump over. I believe that they can do this, and create more effective cancer treatments, hopefully without the awful side effects of traditional treatments.