Scientists currently believe that humans are the only species to get heart attacks caused by clogged arteries. New research suggests that a single DNA change 2 million years ago is at the heart of this. Dr. James Jeffrey, a cardiologist, believes this finding creates the link between genetic and environmental factors which cause atherosclerosis and inflammation of arterial walls. However, even chimpanzees do not suffer from this affliction, meaning these types of heart attacks are specific to humans.

To find out why researchers led by Dr. Nissi Varky and Dr. Amit Varky looked at a gene known as CMAH.  This gene functions by creating a sialic acid sugar molecule known as Neu5Gc. In other mammals a functioning version of this gene appears to greatly reduce the likelihood of atherosclerotic damage in blood vessels. The problem is this gene seems to have been switched off in humans roughly 2 to 3 million years ago. The researchers hypothesize that a dangerous malarial parasite thrived in the presence of Neu5Gc which forced the human genome to evolve and shut down production of this gene. While this change benefited humans by causing resistance to these parasites, it may have caused humans to become more vulnerable to develop fatty deposits in arteries.

To test this theory, the team compared rates of atherosclerosis is mice with a working CMAH gene and a genetically modified version of the gene not producing Neu5Gc. This test showed that mice with the non-working gene showed nearly double the fatty buildup in their blood vessels. The mice without the gene were then fed red meat, which naturally contains New5Gc which caused even more significant buildup of fatty deposits in blood vessels.

The researchers believe that this could be a reason that diets high in red meat are linked to heart disease. The hypothesize that contact with Neu5Gc sets off an immune response which leads to a chronic state of inflammation within the blood vessels. This gene may be the reason why people who don't eat meat altogether still are at a high risk for heart attacks while our other mammalian ancestors are not, Currently heart disease is one of the leading killers in the United States. If a form of gene therapy was developed to target this gene, and also other genes involved in how the body reacts to Neu5Gc, a very large dent could be made in the number of people who are claimed by heart disease, which is rapidly rising. 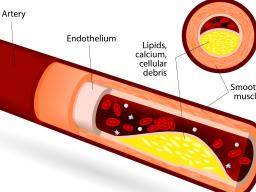 https://www.usnews.com/news/health-news/articles/2019-07-29/one-gene-change-2-million-years-ago-left-humans-vulnerable-to-heart-attack
Posted by Dan Gumpper at 8:50 AM