The National Heart, Lung, and Blood Institute defines asthma as "a long-term condition that intermittently inflames and narrows the airway in the lungs". When the airways are inflamed, the swell and cause wheezing, coughing, shortness of breath, and chest pain. Asthmatics are commonly prone to more allergens, have higher mucus production, and are more susceptible to illnesses. If the disease is severe and constant, it can cause a decrease in quality of life.

Researchers at Karolinska Institute in Sweden began to use single-cell RNA sequencing to analyze active genes in individual T cells in mice. The mice were introduced to house dust, which is a common allergen in asthmatics and induces inflammation in the lungs that are similar to asthma. The researches monitored the gene expression prior to and after the exposure of the allergen.

They found that in mice lungs, the T cells have genes that are mainly linked to how the cell makes and breaks down fat. Using this knowledge, the researchers gave the mice a drug to block metabolism and noticed that the inflammation decreased. Another finding in this study is when T cells of the mice with asthma symptoms reach the lymph glands cytokines interleukins 5 and 13 switches on which causes respiratory inflammation, muscle contraction, and mucus production.

Another research team further analyzed the links between asthma and metabolism. They found that mitochondria of asthmatics rely less on glycolysis and exhibit "greater tricarboxylic acid cycle (TCA) activity". The researchers also discovered that ARG2 gene variants are located within an asthma linkage on chromosome 14q24. When alterations occur on the gene ARG2 it's linked to asthma and the severity of it. They discovered in mice with a deficient of ARG2 there were alterations in cellular metabolism and more severe inflammation.

As someone with severe asthma and allergies, I found both articles to be very interesting and hopeful. I had known that allergies and asthma go hand in hand with each other, but I wasn't aware that metabolism had an effect on the inflammation caused by asthma. To read that when they blocked the metabolism in mice the inflammation decreased to the levels of the control group and that the ARG2 gene had a strong linkage to asthma and the severity of it was amazing. It leads me to believe that soon there will be a drug for human use that can treat asthma better than medications used currently and almost, in a sense, "cure" the disease. 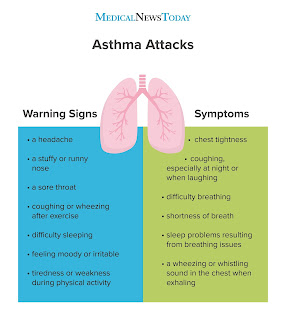