Free diving is the sport of diving underwater without the use of any breathing apparatus. This technique has been used for thousands of years by island communities to hunt and gather food. The Bajau people of Southeast Asia, known as "Sea Nomads," have collected food by free diving with spears. They now live around the islands of Indonesia and are renowned for their ability to hold their breath for incredible amounts of time. The members of this community can dive up to seventy meters with only some weights and a pair of wooden goggles. Since the Bajau people do not dive competitively, it is impossible to know exactly how long they can hold their breath on average. However, a diver in the Bajau community told a reporterthat he had once dived for over 13 minutes.

Other diving mammals, such as the seal, have disproportionately large spleens for their body. This led Melissa Llardo, from the Center for Geogenetics at the University of Copenhagen, to wonder if the same trend would follow in diving humans. She traveled to Indonesia and met the Bajau people, who were surprised that she had even heard of them. She then asked to take ultrasound pictures of their spleens and spit samples to compare to a related group of people from the Indonesian main land, the Saluan.

On average, it was found that the spleen size of the Bajau was 50% larger than that of the Saluan. From the spit samples the researchers also found a gene called PDE10A, which is thought to control a certain thyroid hormone. This hormone has been linked to spleen size in mice, and when they have a lower level of this hormone, they also have a smaller spleen size. The PDE10A gene was only found in the Bajau people, which could be an explanation for why they have larger spleens. 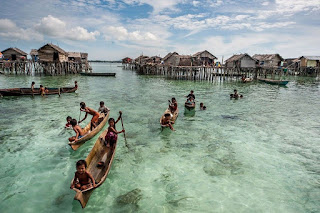 Melissa Llardo theorized that natural selection would have helped the Bajau people gain a genetic advantage over thousands of years of free diving. Unfortunetly, the Bajau way of life that has persisted for generations is increasing under threat. Overfishing is making it harder for the Bajau to subsist on their local stocks and because they live out to sea, they do not enjoy the same citizenship as those on the mainland. Because of this, many of the Bajau people choose to leave their "sea nomad" life, making their tribe smaller and smaller. 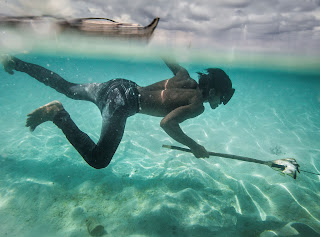 Posted by Joelle Tucker at 5:21 PM