Researchers at the Salk Institute recently found the gene that determines whether the roots of a plant grow deep or shallow. Previously, information regarding the complex root system beneath earth’s surface was almost entirely unknown. This finding has led to the possibility of creating plants that could slow or prevent climate change.

It is explained that researchers use “the model plant thale cress to identify genes and their variants that regulate the way auxin, a hormone that is a key factor in controlling the root system architecture, works.” By analyzing the genes, they can determine a way to control the thickness and depth of the roots. 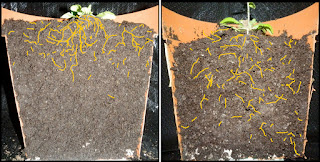 Originally, the research team struggled to be able to visually identify the root system in this specific plant because it is very small. Therefore, they determined a method by which you split the plant in half. Additionally, it was found that the gene, EXOCYST70A3, directly controls the root system without affecting other genes or disrupting other systems. By finding this gene, scientists are understanding how plants can adapt and change in differing climates.

I think this research is extremely important because climate change is something that can and will affect all of us. If scientists are able to come up with a way to slow down this problem, that would be not only incredible, but immensely needed.