Narwhal Populations Are Thriving Despite Lack of Genetic Diversity


In the scientific community it has long been thought that in order to be a fit and thriving population, you need to have high genetic diversity within that population. In the case of the narwhal- a two ton porpoise known for the 8 foot tooth that grows out of its upper lip- their population has very low genetic diversity. This would normally correlate to a species that is close to extinction. To researchers surprise they found that the narwhal populations are thriving with numbers in the hundreds of thousands.

“There’s this notion that in order to survive and be resilient to changes, you need to have high genetic diversity, but then you have this species that for the past million years has had low genetic diversity and it’s still around — and is actually relatively abundant,” Eline Lorenzen, a molecular ecologist and curator at the Natural History Museum of Denmark, who led the new research, said in a statement.

The reason it is thought that high genetic diversity makes a population less vulnerable to extinction is because having a larger pool of genes to choose from makes it easier to evolve in repose to changes in a populations environment. Researchers estimate that the global population of narwhals is 170,000, enough to move the narwhals from the status of "near threatened" to "least concern," which means they are doing just fine. 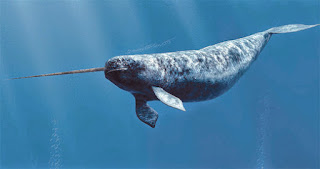 Although this discovery shows that narwhal population sizes are great despite the odds, it does not guarantee that they will be able to adapt to the rapid climate change that is taking place in the arctic, the only place that narwhals live. Temperatures on this planet are rising and ice is melting. In the near future narwhals will be challenged and their low genetic diversity that has sustained them for hundreds of thousands of years may not be enough to endure the changes that have been occurring.

Posted by Joelle Tucker at 5:11 PM