Genetics of Obesity in Humans

According to the EndocrineReviews Journal, genetics plays a large role of obesity in humans. Although not maintaining a healthy diet and not preforming enough physical activity triggers and leads to obesity, it is important to take in consideration the hereditary factor that influences weight gaining. A study was done on parents and their offspring, as well as, twins and adopted children. The study was done in order to investigate the genetic contribution of the body weight throughout the family. As a result, the studies reported around 40%-70% for heritable traits for the most part. Form this, it was able to know that indeed, weight can be considered a heritable trait, that is only slightly less than the trait of height in humans. So far, evidence demonstrates that obesity is the result of a mixture of both environmental and genetic factors. I found this article to be very interesting because I always had in mind that humans gain weight and lead to obesity because of the type of diet that they follow. 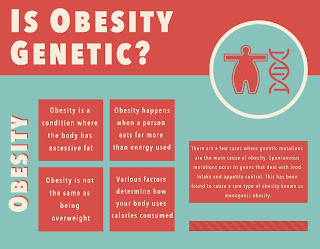 Posted by Gabriela Gutierrez at 8:46 PM