Researchers at Columbia University Medical Center published an article on Science Daily in which scientist have discovered a new particle in fat that works with the immune system to rejuvenate fat and help fight infections. Adipocytes are specialized cells found in fat tissue that stores excess calories as triglycerides and breaks them down to smaller fatty acids and releases them to the blood steam to be used as energy. However, it was discovered that fat tissues also contain many immune cells, including a large number of macrophages. The macrophages take up the lipid-filled particles, called adipocyte exosomes (AdExos) which control the development of immune cells. I researched more information of adipocytes and found that they produce antimicrobial peptides, pro-inflammatory cytokines, ad adipokines that work together to combat infection, modify the function of immune cells and maintain metabolic homeostasis. 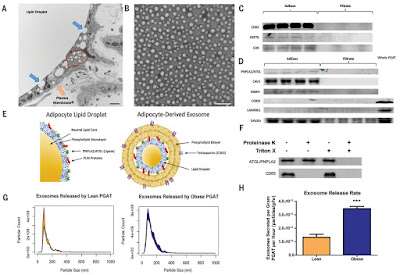 
Scientists aren't sure how this is happening, but believe it is similar to the mechanism of bone, where osteoclasts breakdown bone to calcium and phosphate, which is used to make new bone. The function of AdExo was studied only in mice, therefore, I believe more research is required to investigate to see if these particles appear in humans, and whether they contribute to lipids we measure in circulation and in metabolic diseases.
Posted by Maftana Muradova at 2:14 PM