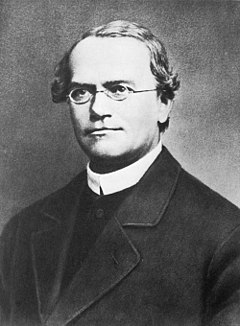 Everyone knows Gregor Mendel as the father of genetics, but what to we really know about the man himself? There are not many letters that he wrote himself available for reading, and only a few of his letters to Charles Darwin have survived. Mendel's "intentions in studying plants" has been a long anticipated question. In a recent article in GENETICS, by Peter J. van Dijk et. al, two newspapers have been newly found that uncover Mendel's hidden motivations.
The popular opinion is that Mendel was trying to figure out "the rules of inheritance" but others argue that he was simply trying to figure out if he could create a new species from hybridization.

Van Dijk found these "overlooked" articles, one published in 1861 emphasizing Mendel's desire to produce new and improved crops and flowers in the region. He was "surprised" by the results of his crosses that produced "plentiful fruit".
The second article, published four days later, slightly criticized Mendel saying that the extent of his work was "exaggerated" and to not give him so much credit. Mendel may have thought he was doing a great work of the people of his region, but others thought it was highly over-glorified and was not that big of a deal.
Both newspaper articles found stress the fact that new science in its time is not exactly what everyone wants to automatically believe: it takes time for an idea to become part of everyone's thinking and to accept it as truth.

I believe that Mendel was a great scientist and did a great work for the work of science, genetics, and heredity. It is understandable that at his time his work was misunderstood because the science he was addressing was an uncharted water and at the time some people did not know what to think about this new world being discovered until more people started to study it as well.
http://genestogenomes.org/what-inspired-mendel/
http://www.biologyreference.com/Ho-La/Hybridization-Plant.html
http://www.genetics.org/content/210/2/347