Reporting from the Maury Show: Two Female Mice are left with pups, but where is the father??

While Maury disputes over who is the father, we will have to resort to his team of "experts" who can run the DNA of the pups to test the possible parents. However, they said something seemed off with the analysis, the children have the combined genes from only the mothers! Can it be possible that true love at first sight knows no boundaries?

Miraculously, scientists in China have been able to reproduce viable offspring using parents that are of the same sex. While the idea may seem amazing, the technique is relatively new and is not successful enough to implement outside the lab. In fact, female-female parents are only 14% likely to produce healthy-viable offspring whereas male-male parents have a 2% likelihood of producing offspring which end up dying soon after (1). Nonetheless, the process is highly sophisticated and the procedure slightly differs between the two sexes.

For female mice, what happened was that scientists made their eggs act like sperm. They used chemicals to treat the eggs in a manner that an egg thought it was fertilized, causing it to undergo division. At that moment, the researchers extracted stem cells that were haploid and used CRISPR to delete various sections of DNA to erase the genes coding for being an egg. Lastly, this "sperm cell" was fertilized with an egg extracted from the other mother and placed into a separate surrogate mother. 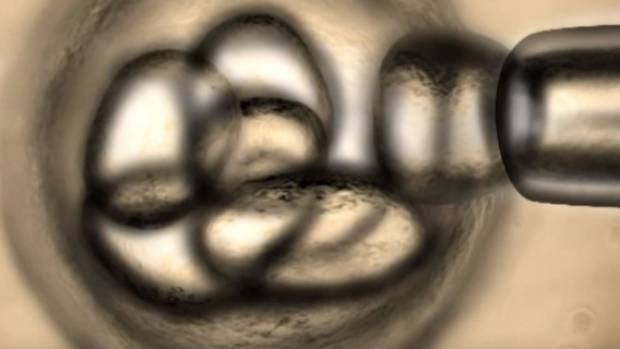 A female egg being treated to act like a sperm cell

When it comes to male mice, I imagine the resulting egg as someone who did their middle school art project the day before it was due. The researchers had to extract a haploid stem cell as they did with the female mice, but what was tricky was that they had to convert a sperm cell into an egg. At this point, they were able to pair the modified sperm cells from both fathers into an enucleated egg, an egg which had its nucleus removed, erasing its biological instructions. The scientists then tried to create and combine the enucleated egg into a placenta and I imagine that was when it all started falling apart. Of course, should there have been pups born from the procedure they were doomed to die shortly after.

Although the idea of producing an offspring from the same sex seems cool, I am not sure how practical it will be in the long run. The article even mentions that it will be an arduous process to convince people that it is a safe practice for human use. Moreover, it will be a complicated process taking this procedure out of mice and using it for humans, especially if there is a percentage that the procedure could compromise the health of a baby. I also wonder how this technique would affect a boy and a girl given that their parents may only be the same sex. However, at one point in time, no one could have possibly imagined that the world would be this advanced, so you never know what could happen in the future.
Posted by Unknown at 8:43 PM