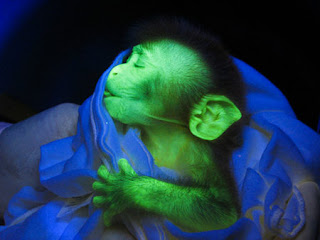 Scientists Place Jellyfish Genes Into Monkeys is an article explaining the method of incorporating specific jellyfish genes into the rhesus monkeys' sperm cells.  This technique is currently being experimented on and tested to then be able to
mix human genes into monkeys.  If this is an effective technique, it is hoped that fertility doctors would eventually be able to infuse genes into human embryos to reduce and possibly prevent diseases.  The blend of genes would act similarly to vaccinations that are injected into children.  However, added genes may not only just deal with diseases, but could also aid in the improvement of cognition and memory.

To begin the experiment, scientists mixed jellyfish genes into the monkeys by attaching them to the outside of the sperm cell and would then use them to fertilize an egg.  In order to see if the jellyfish genes were present, scientists would then take the sperm cell and place it under a fluorescent light.  If it glowed green, the jellyfish genes were actively working and incorporated in the cell. However, when these mixed sperm cells swam towards the egg and shed their outer coat, the added jellyfish genes were discarded and only the genetic material of the sperm fertilized the egg.  Scientists then discovered that the jellyfish genes would enter the egg if they were directly injected into the sperm themselves.  This experiment was also recently done as Dr. Yanagimachi fused the jellyfish genes into rabbit sperm, as he was the first scientist to directly insert the jellyfish genes into a different animal's sperm. With these tested animals showing the traits of glowing fluorescent, there are no other added benefits.  However, with knowing that this experiment works, it gives scientists the ambition to begin adding genes that will have beneficial results.
While I believe that adding genes that could help in the prevention of inherited diseases is an interesting concept, I do not believe that it should be done to human offspring as there are possible dangers in doing so, such as affecting nearby genes.  This could then result in unforeseen disabilities or health complications when the child is born.
Posted by mille299 at 9:09 PM