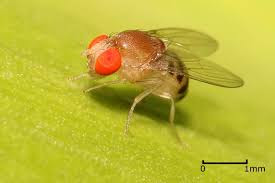 It has been known that fruit flies of the same species have the ability to communicate with one another and that when placing them with fruit flies from a distant species they are not able to communicate as effectively. In a study led by Balint Kacsoh, they found that fruit flies are more likely to get their message across if they have cohabited with each other despite what species of fruit fly they may be. When approached by predators such as the parasitoid wasps, the females use wing movements to communicate the threat to other females. This notifies them to lay fewer eggs despite them never having seen a wasp. The parasitoid wasps have the ability to deposit their own eggs into the larvae of fruit flies, killing the offspring of the fruit flies. Living together allowed the flies to learn new dialects composed of visual and scent cues. Although cues among the same species already exist, this shows the evolution of dialects which enables these different species to communicate.

The dialect barrier can be alleviated through socialization between species. This may as well be the same for other species as well. Whereas if two species did not cohabit than the message would be lost in translation. I find this information to be very interesting since we are now working with fruit flies in the lab and allowing fruit flies of different species to cohabit.
Article Link
Related Article
Posted by Unknown at 1:40 PM