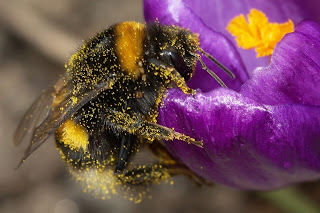 An article done by the New York Times reviews certain factors on how to stop honeybees from becoming queens. Researchers from PLOS Genetics found that certain molecules in the pollen of flowers and in honey will determine if females will be able to reproduce and live a longer life, or if they will become sterile and a worker bee. These conditions are directly linked to their diet, and not determined at birth like many would think. MicroRNA is contained within the small molecules of the plants which affect plant size and color. This microRNA, when transferred to a bee can affect genes and inhibit growth to the bee, making the bee sterile. In an experiment done by Nanjing University in China, researchers raised honeybees to better understand the microRNA effects to their growth. In larva raised on the microRNA contained diet, it was found that the bee population had smaller bodies and smaller ovaries than those raised on a diet not containing the microRNA. Researchers found that the TOR gene for growth is affected when the microRNA is ingested.

Scientists also studied the interdependence between the honeybees and the plants. Through honeybee pollination, certain flowers can become larger and more colorful thus attracting more bees creating a larger pollen spread. Researchers also suggest that further study of this interdependence can be applied to areas like therapeutic research for applications in cancer or obtain a better understanding on seasonal allergies and anaphylaxis.

This article in my opinion was very informative. The honeybee population is on a steady decline which should be a major concern for everyone. Without the honeybee population, many plants would not be pollinated. Therapeutic research through these interdependencies of plant and insect is also an interesting field to study.