New gene studies have allowed genetic researchers to discover more than 500 genes they believe can be tied to IQ test results. These studies involve over 200,000 test takers and there are impending results coming out soon in another experiment involving one million people's DNA tied to their academic success. A concept called precision education involves a DNA IQ test that will allow parents to purchases tests themselves through retail that they can than use to test their children and forecast their academic success. At the current moment the variations among these tests have explained less than 10% of the difference in intelligence between the people of European ancestry who have been studied. There are at least 3 online testing services that are already offering to quantify a person's genetic IQ. 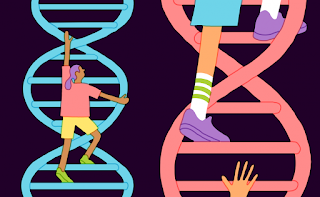 I think this is interesting, however I am cautious to give it a ton of merit until more studies follow with similar or stronger results. If this is a plausible concept it would certainly be beneficial to the  parents who are the type of people that want to know every little thing about their child so that they can plan accordingly. As a future educator I do not believe that there is much here that should be used in deciding what type of classroom or learning environment a student belongs in. I think it is very dangerous to forecast what type of student or how smart a child will be. Genetics may offer an early advantage to some people, but that is only a small head start, the vast majority of what makes up a person's personality and intelligence has a lot to do with the environment they are in while in their early developmental stages. So cool concept, may turn out to be plausible and a tool parents can use if they want, but I don't think there is any place for this in schools.

P.S.- Hoping some fool does not try to turn this science into race like we discussed earlier in the semester.

2nd Article: https://www.newscientist.com/article/2163484-found-more-than-500-genes-that-are-linked-to-intelligence/
Posted by Unknown at 2:47 AM