Genetic Modifications Cause Beetle Wings to Appear on their Abdomen 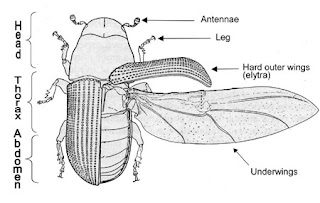 The New York Times highlights an article published in the Proceedings of the National Academy of Science on how beetles can have genetically modified wings. Dr. Tomoyasu, an evolutionary biologist at the University of Miami, and David Linz have altered the common beetle to have more than two sets of wings on their back. These wings have been genetically engineered to be housed on their abdomen while the beetle is in the larva stage. Since there is a lack of fossil evidence, its hard to tell exactly when insects first took flight (estimated to be approximately 300 million years ago). Some scientists think that insect wings were formed by the fusion of two tissues. The “dual origin” hypothesis of 1974 states that the wings of insects formed when the dorsal body wall and the leg segments fused together. There is some evidence to prove this since some insects have lost the capability of their legs since they have ascended into the body, and some have had them located to their head, which created the antennas. Master switches in the beetle’s genome were manipulated which let the scientists alter which area of the body would have wing growth, however this also altered anatomical structures to the beetle that did not relate to flight at all. GFP (green fluorescent protein) was also introduced to the beetle to mark where the expressions of certain genes were relating to flight.

This article was a good read. Since working with GFP in the lab it is interesting to see the protein being used on a much larger scale level and how it can be used for genetic manipulation in the laboratory setting.