Virus found to adapt through newly discovered path of evolution 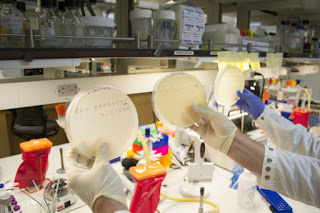 Colleagues of the University of California San Diego has discovered a new path of evolution. They found a process that is previsously unseen in evolution. With these new finding they were doing research on how mutations arise to make transmission easy from one host to another and how genes acquire new functions. This could be applied to investagate virual diseases such as bird flu and Ebola. This was a step in the right direction for these researchers, they realized by learning how virsues achieve evolutionary flexibility they can have a new way of how to step up “road blocks” to stop new diseases from emerging.


Katherine Petrie led this project, the researchers used lamba, which is a virus that infect bacteria but not humans; this allows flexibility in lab testing. In the lab they were able to capture the evolutionary process in action. They found that the proteins mistakes allowed the virus to infect the normal host. Now the researchers are looking for eamples of their new discovered evolutionary epsidoe and to see how common this is.