The True Origin of Ovarian Cancer

New evidence is suggesting that ovarian cancer does not originate in the ovaries, but rather the Fallopian tubes. Douglas Levine, the Director of Gynecologic Oncology at Perlmutter Cancer Center at NYU Langone Health in New York City along with colleagues took cells from the Fallopian tubes, ovaries, and lining of the inside of the abdomen of healthy women and compared the cells to the precursor lesions and tumors of 96 women with high-grade serous cases of ovarian cancer to
see which healthy cells the cancerous cells were genetically more similar to. They found that in almost every case, the cancerous cells were genetically similar to the cells from the Fallopian tube, suggesting that ovarian cancer is actually Fallopian tube cancer. 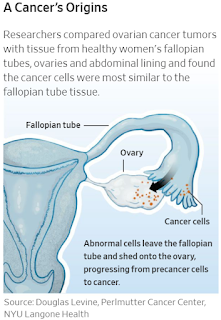 About 15-20% of Ovarian cancer is inherited and women that test positive for a mutation in the BRCA1 and BRCA2 gene have increased risk of developing ovarian cancer. And because there is no way to screen for ovarian cancer, it is recommended for women to receive preventative surgery  between the ages of 35 and 40, by removing the Fallopian tubes. However this removal causes premature menopause, and for many, a decrease in their quality of life.

A second study by Victor Velculescu, Professor of Oncology and Co-director of Cancer Biology at Johns Hopkins University School of Medicine, and colleagues examined small lesions in the Fallopian tubes, Fallopian tube tumors, ovarian cancers, and metastases of women with high-grade serous ovarian cancer and sequenced the genomes of the tumors to identify which order the lesions appeared and found that there was a gab of seven years between the development of the lesions and ovarian cancer, and then quickly spread after a year. Using this information, doctors could possibly find these lesions early and stop them before they spread.

I think it is interesting that a common, but dangerous cancer may have been incorrectly named and had been for many years by believing it originates in the ovaries rather than being able to notice early enough to see that it is spread to the ovaries from the Fallopian tubes. By paying more attention to any lesions developing, it could be possible to prevent the cancer from spreading  if found early enough and with preventative surgery, the possibility of only needing to remove the Fallopian tubes without the ovaries. I am interested to see how this information can be used with other types of ovarian cancer.