Ant raids: It's all in the genes 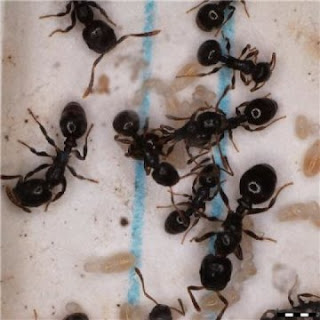 Scientist has recently been studying certain ant attacks and have been intergrading their offspring into their own colonies in order for survival. They have recently discovered that these raids required to achieve the goals are controlled by a different gene in each of the closely related ant (Temnothroax). This proves that through the different changed in the genetic material is due to random. This means that although there are several different paths, they could all have the same outcome.

Within this research, the scientist at Johannes-Gutenberg University Mainz was able to identify two specific attack genes in slave maker ants. The first gene is “Acyl-CoA Delta (11) Desaturase which causes the attackers to release chemical scents during the raid. These scent mask the attackers, which helps them lead a successful raid. On the other hand the other gene that was identified was called Trypsin-7, which appears to have an affect on the recognition potential of identifying the host colonies required for a raid.
https://www.sciencedaily.com/releases/2018/03/180307100630.htm

Posted by taylor abbott at 5:57 PM