Coffins of two mummies who may be brothers are displayed in the Manchester Museum. Some anticipated the thought of the two mummies being brothers for many reasons. Scholars pointed out that the anatomy of the skulls were different and researchers began studying scraps of their skins. From this information, researchers concluded that their complexions revealed that they do not share parents. Genetic studies are being tested to help determine if these conclusions are true. The researchers began to analyze DNA and have also dug deeper into the mummies Y chromosome, which were inherited from their father. The DNA results showed that complete mitochondrial profiles have been recovered, therefore making them being able to say confidently that they are maternally related. According to an article on News Week, "The researchers say that the different treatments of mothers and fathers in the inscriptions suggest that maternal heritage was more important to the ancient Egyptians than paternal heritage was." I found this article interesting because I think that it is cool that there is technology out there to be able to help researchers trace back ancestry. Even including mummies, that is something that always seemed interesting to me throughout history. 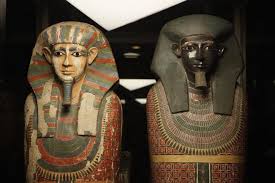