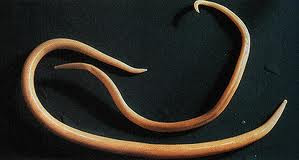 An article done by the New York Times describes how tiny roundworms, Caenorhabditis briggsae and Caenorhabditis nigoni are extremely similar genetically, but very different in their sexual reproduction processes. In order for C. nigoni to mate, there needs to be a male and a female for fertilization to take place. This is different for C. briggsae however, in that they are able to self-fertilize by producing sperm to fertilize their own eggs. Because C. briggsae are hermaphroditic, there is no need for sexual reproduction. This genetic adaptation has occurred because there is a lack of males in the population. In a study published in Science in the beginning of January of 2018, biologists found that since the hermaphroditism took place in the one set of roundworms, it lost half of the genes since it broke away from C. nigoni approximately a million years ago. A study done by the University of Maryland-College Park concludes that this loss of genes is related to the male population which is dwindling in numbers. When introduced to the male secreted short genes (m.s.s.), C. briggsae produced more offspring than the hermaphroditic organisms. Dr. Haag from the University of Maryland-College Park suggests that these organisms leaning towards hermaphroditic lifestyles may “put a break on population”.


This article I found very interesting. It’s neat to see how hermaphroditic traits in one roundworm compared to their ancestral sister alter their entire genome. Although the roundworm C. briggsae do not yield as many offspring through self-fertilization unlike if they were to be in contact with a male, it provides evolutionary traits in that population growth and size can be halted/reduced. It’s also hard for these worms to find mates as well, which make it hard for new colonies of C. briggsae to get started.

(Related Article)
Posted by Dan Patrick at 10:06 AM