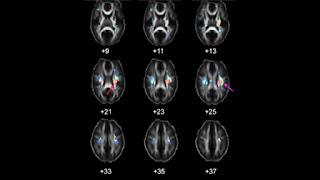 A research was done with more than 6000 pairs of twins found that academic achievement is influenced by genes affecting motivation, personality, confidence, and dozens of other traits. The researchers have also shown that a person's IQ is highly influenced by genetic factors. They identified about 20 genetic variants associated with intelligence, each accounts for just 1% of the variation in IQ scores. The genetic variants associated with head size and the volume of the hippocampus is important for learning and memorizing. However, it is been unclear whether the same genes that influence IQ also influence grades and test scores. Thus, by doing researches with twins, whom share the identical genome with each other concluded that there is a genetic basis for the differences in how easy or enjoyable children find learning, rather than their actual IQ. In my opinion, this research is fascinating, due to the result of it is so different from what the society expectation and from what I known. I thought intelligence is always correlated with how much neurons one have or their ability to learned and memorized fast. However, this study proved otherwise, it is due to their genetic variants regarding about the personality which corresponding to the feeling of enjoy the subjects that one are learning.
Reference:
Link 1
Link 2
Posted by Trang Tran at 9:31 PM