Boy or Girl? Depends On The Father's Genes 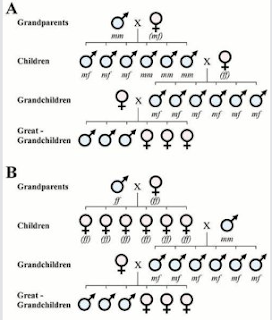 In a study by Newcastle University, thousands of families were used to study their family trees and see what the expecting parents would likely have. The purpose of the study was to show that whether a couple would have a boy or girl solely depends on the fathers genes. The sex of the baby is believed to be inherited so if a man has more brothers then he is expect to have sons, and the same goes for if he has more sisters it would be expected that there would be more daughters. The study suggests that a undiscovered gene controls whether a man's sperm has more X or Y chromosomes. The study also suggests that the gene consists of two alleles that result in three possible combinations; one being mm and results in the man producing more Y sperm and having more sons, the other being ff and results in the man producing more X sperm and having more daughters, and the third combination mf results in the man being equally likely to produce X sperm as he is to produce Y sperm. The picture above shows how the grandparents affect their children and grandchildren.

This is very interesting to read. I feel like more people should know about this because a lot of times people just wish they could have a daughter or wish they could have a son. If people read this article and created a family tree even without much genetic knowledge they can have a better idea of what they're likely to have.
Posted by Unknown at 3:08 PM