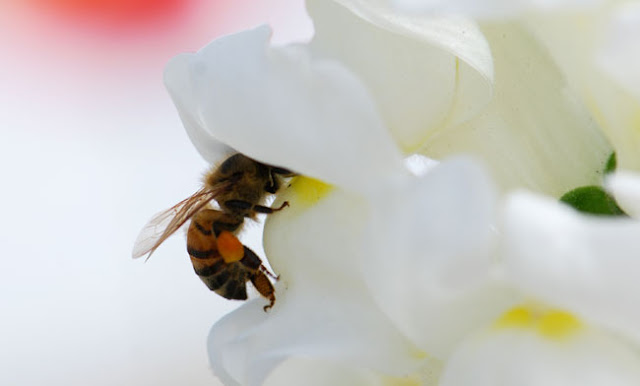 According to an article written by The New York Times, snapdragons lure in bees with the color of their petals. Apparently, the colors of the petals are a big contributor to whether or not bees will come to them to collect their nectar. According to the article, there are two colors of petals that were studied, the magenta and the yellow. In one species of snapdragon, the petals would be magenta with an accent of yellow on them, and the other would be the opposite with yellow petals with an accent of magenta. It turns out that both of these species shared 30,000 of the same genes, but they still had different colors for their petals. This change in color was represented by the change in sequence of small RNAs, which are made up of approximately 50-250 nucleotides, and are responsible for how certain genes express themselves. It turns out that if the small RNAs make the genes express magenta petals with yellow accents, then bees are more likely to come to them and the same goes for the yellow with the magenta accent. If there was not an accent on the petals for either color, then the bees would not be as interested in going to those snapdragons. This helps us better understand that natural selection still plays a major role on the ecosystem, since changes on the genetic level can lead to certain organisms to thrive, and others to not.
Natural selection has always been a very interesting subject to me. I think that it is very compelling that nature has ways of "selecting" for certain genes and alleles that allow for certain organisms to thrive and others to not. The idea that slight changes in DNA and RNA can lead to either extreme or very slight changes in behavior is so interesting because it shows us that multiple "solutions" in natural selection can benefit the same species in multiple ways as demonstrated by this experiment.