In recent research published on ScienceDaily, it discusses a more efficient and simpler approach to using stem cells to restore sense of smell. The nobel-prize winning approach by Dr. Shinya Yamanaka developed an approach by utilizing stem cells lost to aging, and forcing them to behave like embryonic stem cells by provoking them to express the genes that are seen to be expressed in embryonic stem cells. Through years of studying the behavior of stem cells, researchers from Tufts University discovered that adult stem cells are capable of regenerating after there is damage to the tissue. The difference between adult stem cells and embryonic stem cells is that embryonic stem cells are capable of taking on any cell type while adult stem cells play a role in repairing damaged tissue in response to injury and maintaining structure. Researchers from Tufts University used transplanted adult stem cells into mice with damaged nasal tissue and they discovered that those stem cells were capable of repairing all of the cells in the olfactory epithelium.
I believe that this research is definitely much simpler than prior research, which not only decreases complications, but it will also be a potential treatment option that will be accessible to more people. While there is still much more research to be done, researchers hope that they could make a nasal spray to prevent loss of smell and strengthen those tissues. 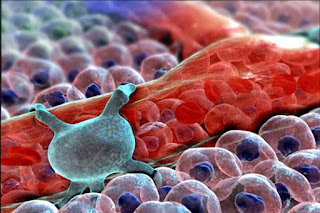