So, Where do Eye Colors Really Come From? 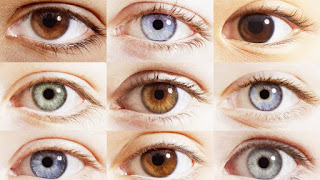 The colored part of the eye is called the iris, and the dark center is known as the pupil. So, what makes the iris appear as a certain color? Maybe brown, hazel, green or blue? Eye color is pieced together by different portions of certain pigment and the tissue that makes up part of the iris. The pigment expressing cells of the iris are known as melanocytes. They can create two different pigments: eumelanin (brown-black) or pheomelanin (red). You can see here that there is no pigment for blue eyes. Blue eyes are formed due to white collage fibers in the iris tissues. Dark eyes are formed from a large amount of pigment, while the blues and greens form from low amounts of pigment.
An article published on Medical News Today, explained that an eye color is made up of many more than just one gene. In fact, the eye color is made up of about eleven genes! Although we know that eye color is inherited from the parents, eleven genes are involved for this one single traits formation. Researchers at Erasmus University Medical Centre Rotterdam did a study on genetic variants in the eleven genes of over 3,000 people. "When they compared these genetic profiles with a new method of assessing eye color in photographs - which was developed as part of the study - the team could reliably predict eye color in most cases."
There is still ongoing research to determine all genes incorporated in the creation of eye color and pattern, but the information obtained as of now is still fascinating. I really enjoyed reading this article. This is such a neat study because most people believe that eye color is passed on from parent to child through a simple gene. It is interesting to learn that there are actually 11 genes involved in this process! This is also very interesting to me because it is possible for two parents with brown eyes can have a child with blue eyes. It all leads back to science.
Posted by Unknown at 12:30 PM