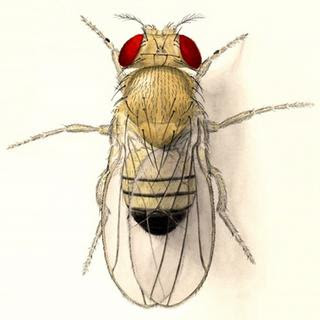 Researchers at the Francis Crick Institute have discovered that some fruit flies can live over twice as long as other Drosophila melanogaster. The flies that are fed a low protein diet early in life, and are switched onto a standard diet as adults, live longer. The researchers found that adult fruit flies release toxic lipids from their skin that shorten their lifespan. However, the lipids were found to be less toxic if the fly ate a low protein diet early in life, before it became an adult. The lipids function to prevent dehydration and stimulate mating behaviors.
The scientists also found that the lipids produced by the flies affect the other flies that are near them. So, if a fly is producing a more toxic lipid, they will have a shorter lifespan, and so will the flies around them.  Since flies affect their neighbors, it causes fruit flies to have a shorter lifespan when they are densely populated. However, when the flies were densely populated, but were genetically modified to produce less toxic lipids, the flies lived longer. Therefore, the scientists concluded that skin toxins cause the fruit flies to have a shorter lifespan, individually and in large groups.


I thought that this article was very interesting because it’s kind of counterintuitive. I would never have thought that something that flies need would be causing them to have shorter lifespans. The article states that humans also produce skin lipids to moisturize and protect our skin. It makes me wonder if the lipids produced by humans are toxic to us, and if there is a way to make them less toxic.  If less toxic lipids cause fruit flies to have longer lifespans, it could also have positive effects on humans.