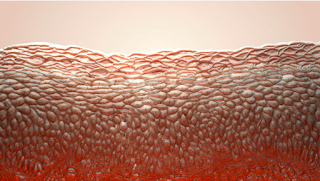 A seven year old with a severe form of Epidermolysis Bullosa (EB) was given a second chance at a normal life thanks to stem cell treatment. EB is a rare genetic disease that is caused by a mutation in any of the many genes that encode proteins that connect the epidermis to the tissue below.Without these proteins, skin is easily prone to tearing and blistering from the simplest contact. The stem cell treatment uses skin grafts with a new gene that counteracts the mutated gene. These grafts are tested on a small area of the body before being used on the full affected areas. The grafts include stem cells that regenerate the skin. The stem cells included the gene LAMB3. After a couple of surgeries, multiple areas of the boy's body were covered in the new skin. A month later, the boy's skin began to regenerate. Now, two years after his surgery he has not had any blistering or tearing in the treated areas. The use of stem cells in order to treat diseases is amazing. This is only the beginning, researchers can use this new information to continue to find ways to manipulate genes in order to treat other severe diseases.


http://www.sciencemag.org/news/2017/11/boy-rare-disease-gets-new-skin-thanks-gene-corrected-stem-cells
Posted by Unknown at 3:37 PM