Yet Another Reason Honey Bees Are Important for Human Life 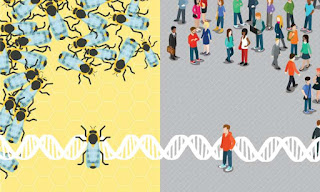 A very interesting study has been done that connects humans on the autism spectrum scale and honeybees. At the University of Illinois, Hagai Shpigler, is doing his post doctorate on a project that involved videoing honeybee’s social interactions during two different scenarios. One type of interaction recorded was putting a bee that was unfamiliar with a colony into that group and the second was introducing an immature queen larva into the unfamiliar group. In all, there were 245 groups of bees that had been brought in from seven different colonies and used to collect data on how the bees would react to the situations and then were ranked on it. The data resulted in 14% of the bees not reacting to either situation they were in while most of the bees were found to show a social reaction to atleast one of the situations. The team conducting this project analyzed the bees who reacted to neither situation and took into account their sets of genes and looked at possible similarities to genes in found in the disorders of autism, depression, and schizophrenia. Genes found in autism spectrum disorder were the only ones to have high similarity to genes found inthe bees of the 14% non social reactors. The researchers found this information to be interesting and plan to possibly find ways to better understand autism spectrum disorder on a molecular level in humans from looking at honey bees.
Posted by Sarah Strang at 11:38 PM