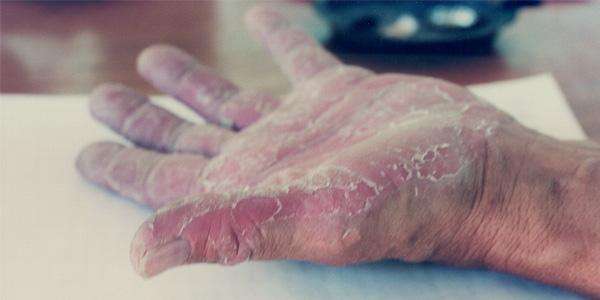 Scientists have now discovered the genetic mutation that is responsible for KWE in Afrikaners. The skin disease causes redness in the palms of the hands, as well as the soles of the feet followed by cycles of large areas of peeling skin. The symptoms are exaggerated in the winter, when the disease is at its peak in the cycle. A town in the Western Cape of South Africa is where it is most prevalence, affecting large families in this region. Keratolytic Winter Erythema, as well as other diseases such as familial Hypercholesterolemia, and porphyria are very common in this area as it has been observed the Afrikaner people have genetic predispositions for them. It has been a recent discovery that KWE is genetically linked instead of an environmental affect, as previously thought. Professor George Findley described the mode of inheritance as being dominant, and an unfortunate disease to have. Although this disease is extremely uncomfortable to live with, it can now be prevented in future generations with genetic counseling. I believe efforts like these to find the root of problems happening in populations are vital in society, especially when we wish to prevent them from occurring.