The Importance of "Refuge Crops" 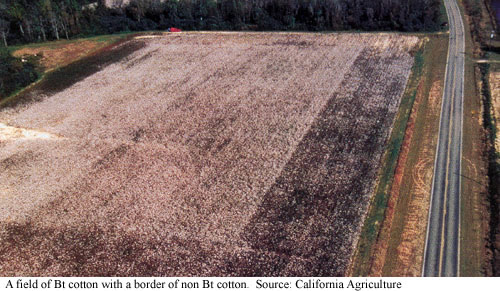 All over the United States, many farmers have been planting Bt crops each year as a way to increase yields and cut costs. These Bt crops - which includes corn, potatoes, and cotton - are designed with the ability to produce a protein called Bacillus thuringiensis, which kills many pests that would otherwise harm the crops. This alteration allows farmers to use less pesticides while growing, which puts the consumer's mind at east while at the same time saving farmers money. It's a win-win right?

Except that many of the pests the Bt gene was designed to kill have adapted to it in the past 20 years that is has been in use, leading to Bt resistant bugs; a danger to both Bt crops and non-Bt crops. This has caused regulations to be enacted by the EPA the mandate the use of refuge crops, which are non-Bt crops meant to be a buffer of sorts where pests who are not resistant will flock and breed with the pests who are, diluting the gene pool of resistance. Currently, farmers are required to plant at least 20% of their total acreage as refuge crops to combat this issue, as explained by UCSD's website, but many farmers, unfortunately, do not follow this regulation.

To understand more about why farmers choose to not follow this regulation, Professor Dominic Reisig at North Carolina State University decided to interview farmers across more than twelve counties in his state to figure out what would lead farmers away from using refuge crops, and how they could be encouraged to do so. His findings were insightful. First, he found a correlation between acres of land farmed and the amount of refuge crops planted. The more acreage a farmer plowed, the greater the amount of refuge crops planted. This suggests that farmers who run smaller or private operations are less likely to use refuge crops, as they are in need of greater yield. Another observation was that farmers who were pressured by others in the surrounding area or by enforcement of regulations were in fact less likely to plant refuge crops. Reisig was astounded to find that a majority of farmers understood the function of the refuge crops and knew the importance of them, which he originally hypothesized would be the problem, and instead had other reasons for not planting them.

Some suggestions that farmers in North Caronlina gave for incentives to plant refuge crops were rebates and a higher yield, affordable refuge crop seed. Though it is no definite answer to the problem of Bt resistance and refuge plants, Professor Reisig feels it a good starting point.
Posted by Unknown at 12:31 PM