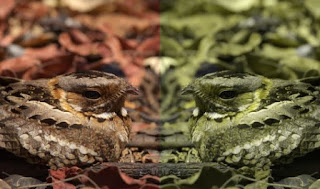 When looking at the picture above, to left the is how we would perceive the color of the image because we have three different cone cells in our eyes making us trichromatic. To the right is how dichromats would see it because they only have two types of color receptors, this includes a vast variety of animals. Researchers from the University of Exeter wanna know why so many animals are dichromatic and how color vision affects animals abilities to detect camouflaged prey. To conduct this research comparing our trichromatic vision to that of the dichromat the researchers had 30,000 individuals take part in a computer game where they were shown photographs and had to find camouflaged nightjar birds or nets containing eggs. The game produced photos that were either in their normal color or in a version that imitated the limited colors seen by dichromatic vision of predators. It is thought that there must be some sort of evolutionary advantage to seeing in just two primary colors as opposed to the way we see because so many animals have the red-green color blindness along with the fact that colors are thought to interfere with animals ability to detect camouflaged prey. When the data was collected from the game the researchers were surprised to find that trichromasts found the nightjars and eggs faster than the stimulated dichromats. However, they then found that there was a huge difference in how the dichromats improved over the course of the game and how much their capture times were affected by different camouflage types. This is something that I have always wondered about because I find it bewildering how effective not only the camouflage is but how well predators can seek out those prey who are so well disguised when we would have a hard time spotting them.

Article:https://www.sciencedaily.com/releases/2017/04/170413084644.htm
For more information on trichromacy: http://anthro.palomar.edu/primate/color.htm
Posted by Monica Martinez at 1:04 AM