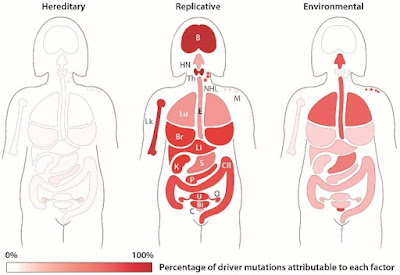 As human beings on planet earth, we all understand the detrimental affects cancer has on the population as a whole. New research has been conducted concluding results that the highest percentage of cancer, 66%, is due to random mutations and mistakes. 29% of cancers are were due to environmental factors, and the lowest percentage happens to be 5% due to inherited mutations. Unfortunately, most people think they are at a high risk of the cancer because of their familial lineage but according to research that is an inaccurate statement. Based on the study and research conducted, the chart listed above shows the percentage values for specified cancers and their likelihood for cause. Everything in the charts is an indication of percentage ranges on the attributed mutations as white is the lowest percentage at 0, and red is the highest at 100%. Furthermore reduction of cancerous mutations can be prevented by simple changes in environmental factors, such as cigarette smoke or ultraviolet light. Simple things like this can also help reduce the mutations due to inherited genes such as a woman who knows she is a carrier for the breast cancer gene may decide to have a preventative mastectomy. It is important to understand the implications of lifestyle and the mutations that can cause cancer in order to strategically plan for an elongated life as best as you can. Link to