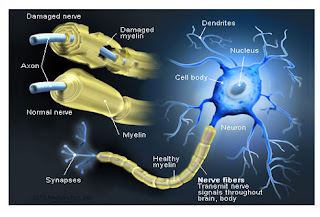 In this study researchers have found that they can restore myelin formation and limb function in mice with MS with the microRNA miR-219.  Multiple sclerosis is a disease that attacks the central nervous system.  This disease destroys the myelin sheath and also oligodendrocytes.  Patients with MS lack miR-219.  Researchers deleted miR-219 in mouse models and found that several proteins that prevent myelin formation were present with the absence of the microRNA.  Then they administered a synthetic version of miR-219 to the MS mice and found that myelin-producing cells were reactivated.  This led to reformation of mylelin and improved limb function.

This could lead to a huge breakthrough in the treatment of MS for humans.  MS is a horrible illness and millions of people in the world are affected by it.  This disease could potentially be eliminated from the gene pool with more advances in medicine.