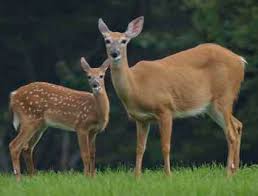 A group of volunteers in Clifton, Cincinnati recently finished sterilizing does in the residential areas. The Clifton Deer Fertility Control Pilot Program is in its second year of capturing the females and sterilizing them to prevent any further births. The neighborhood says a local herd has grown tremendously, and are being destructive towards the land. This idea was proposed because the people did not want the park to permit bow-hunting of the animals. The neighborhood hired The White Buffalo Company  to sign off on this three year pilot program. The results indicate that there are fewer disturbances from the herd, and there are less fawn than the previous years.

This was an interesting article to read, and although this program is the alternative to hunting the animals, I do not agree with the permanent sterilization. I believe, by not allowing the does to reproduce, the people are taking away a key characteristic of their lives. The does should be allowed to reproduce and have their own fawn. I think using animal birth controls, during the right seasons, would be more beneficial. This program does not seem like a humane solution to their problems.
Posted by Unknown at 2:48 PM

Email ThisBlogThis!Share to TwitterShare to FacebookShare to Pinterest
Labels: does, fertility, Sterilization