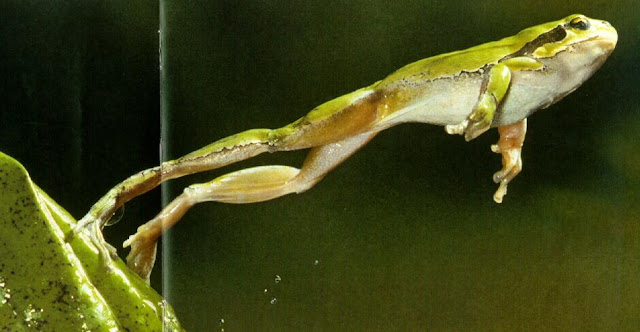 The biology behind a frog’s ability to jump comes from their tendons, their muscles work like a spring that stretches as it begins to lurch forward and then recoils itself. Frogs must generate a high level of mechanical power so when they jump, their muscular system is designed to deliver these high powers. Some tendons do much more than just transmit energy, they can also store it. I read an article that compared their tendons to an elastic bands. When you stretch an elastic band the energy is stored in the elastic so when you let go the energy is released  the effect is the band will shoot across the room.

The frog’s crouched starting position is how they being to build up and store energy. A lot of energy is required to move the legs from this into a straighter position and until the muscle has produced enough energy to move the joints, the power output is stored in the tendon. This trigger is created by the change in posture, from crouched to straight leg. As the tendon gets filled with energy, the muscle continues to slowly contract. This slow, forceful contraction is enough to drag the leg into a less crouched position. The shift in posture encourages the tendon to give up its stored energy. The elastic component, having been stretched by the contracting muscle, suddenly realizing and explosively pulling the back legs into full extension, which catapults the frog’s body upwards and forwards.

I personally think along with jaguars, frogs are incredible creatures. Their morphology is unique because they lack tails as adults and their legs are more suited to jumping than walking. They also are the best jumpers of all the vertebrates, some species can cover over 50times its body length.