Having Twins is in Your Genes

For a while, scientists have known that it was highly likely to give birth to twins being a twin themselves, but nobody really knew why.  After conducting studies and collecting data from over 2,000 woman who gave birth to fraternal twins, a number of researchers from multiple countries collectively found two different genes that increased the likelihood of having twins.  Scientists searched for what are called single nucleotide polymorphisms, or SNPs.  The first one they found was linked to a hormone that regulates the release of eggs from the ovaries.  If levels are too high, multiple eggs could be released, resulting in the birth of fraternal twins or other multiple births.  The second gene found, which is still somewhat of a mystery, relates how the ovaries respond to the hormone that regulates egg release.  Not much is known about the gene, but researchers believe it could relate to why some mothers respond better to in vitro fertilization.  I find this type of research fascinating since I am a twin myself.  Knowing that there is another set of twins in my family always made me wonder if it really is true that having twins is linked to genetics, so finding this article was reassuring. 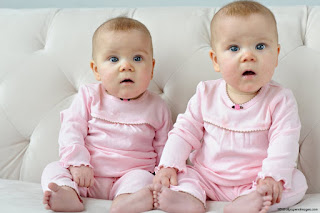