Canine distemper virus (CDV) is one of the many viruses that we prophylactically vaccinate our dogs for every 1-3 years, and is especially contagious to puppies and spreads in places with a high volume of canids. There are various strains of the virus, one of which resulted in fatal epidemic of lions and spotted hyenas in the Serengeti National Park through 1993 and 1994, decreasing the lion population by 30%. Two decades after the epidemic, numerous wild canids were dying from the CDV illness, but fatal CDV was not noted anymore in the lions and hyenas. Scientists found a high number of antibodies fighting against CDV, indicating exposure to asymptomatic outbreaks in the lions and hyenas; so scientists were perplexed as to why the virus was killing numerous lions/hyenas initially, but was no longer fatal two decades later; and now the virus became fatal to canids. 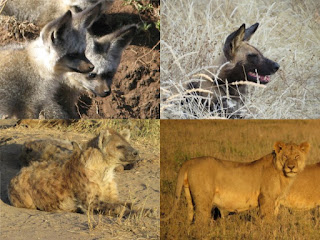 Scientists collected CDV strains from multiple carnivores in the Serengeti between the years of 1993 and 2012 to get a wide range of data. The study determined that there were several CDV strains during these years, all belonging to a new genetic lineage of the distemper virus called "East Africa".
Researchers noted that in the lion/hyena strain during 1993, there were mutations in two viral proteins: the CDV-H protein (binds to the host cell receptor) and the CDV-V protein (allows the virus to manipulate the immune response of the host). The proteins had unique amino acid combinations when compared to domestic dogs and cats, which assisted in revealing that the strains of the wild carnivores versus the domestics differ, which may influence severity and fatalities.
The results suggest that the strain from the Serengeti adapted to non-canid species like lions and hyenas, which may have led to the 1993-1994 epidemic, and then died out. Due to the strain's ability to invade cells, which is dictated by the amino acid combination, scientists found that was why the non-canids were impacted at a faster rate than domestics. Overall, scientists concluded that the Canine Distemper Virus is far more complex and the various strains may extend to more species than they originally predicted.

As someone who has seen the gruesome nature of this virus' effect on domestic animals at work, I am glad that scientists have advanced one step further in understanding the complexities of the virus and the various strains. There are so many mysteries that viruses are capable of concealing, and hopefully with the continuation of research like this, we will continue in a positive direction.