Against the tide: A fish adapts quickly to lethal levels of pollution


The Atlantic Killfish has adapted to live in water with a high amount of pollution that would normally kill them.  The killfish is up to 8,000 times more resistant to pollution than other fish.  This fish exhibits an extremely high level of genetic variation, that is higher than any other vertebrate.  Insects and bacteria have a high level of genetic variation which enables them to adapt quickly to resist pesticides and drugs used against them.  Scientists studied the complete genome of 400 killfish that they took from polluted and nonpolluted sites.  They chose sites that had been polluted with dioxins, heavy metals, hydrocarbons and other chemicals.  The fish were taken from New Bedford Harbor, Newark Bay, Connecticut's Bridgeport area, and Virginia's Elizabeth River.  These sites have been polluted since the 1950's and 1960's.  They found that some populations of Atlantic Killfish evolved tolerance through a molecular pathway once exposed to toxic pollution.  This study may lead to understanding genes conferring tolerance of specific chemicals. 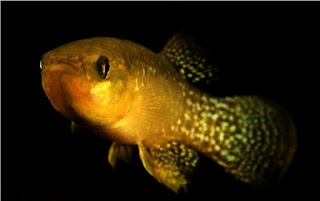