Recent studies conducted on mice, engineered to have Alzheimer's have revealed that light therapy greatly reduces the effects of the disease on the brain. Alzheimer's is an irreversible genetic condition that affects brain function (cognition and memory), and becomes worse over time. The brain becomes congested with beta-amyloid plaque, gamma oscillations become impaired, and begins to form abnormal tau proteins that form tangles in the brain.

Tests conducted at MIT treated diseased mice with light therapy, inducing gamma oscillations at 40 hertz for one hour, beta-amyloid levels dropped by 50%, the only drawback being that beta-amyloids fully recovered to previous levels within 24 hours of treatment. The light therapy also removes plaque and mutated tau proteins. This gamma oscillation also improves the brains overall ability to get rid of mutated or faulty proteins. 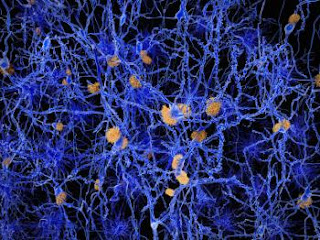 Overall I believe this finding is quite fascinating, and could possibly be a big breakthrough in science and the medical field. It is clearly stated that this study has only been done on mice, but everyone including myself has hopes the effect of light therapy will translate to human beings.


Image taken from http://cdn1.medicalnewstoday.com/content/images/articles/314/314627/beta-amyloid-plaques-between-nerve-cells.jpg
Posted by Jorge Tellez at 12:30 AM