Genetics of Cancer and How To Prevent It

Cancer is the underlining disease of the century. Why is this so? Statistics show that cancer is the second leading cause of death in America, totaling 564,800 people a year, or 1,500 deaths a day (TCLF, 2016). To understand how to prevent cancer, we first must understand what causes cancer. Cancer is essentially a process where old cells do not die and abnormal cells are created, which can form a tumor. These tumors grow and can spread throughout the body, making it incredibly hard to treat if it isn't caught early on (Cancer Center, 2016). The purpose of this blog is investigate some genetic situations where cancer tends to be prevalent.

One example of an inherited gene that primarily causes breast cancer in women and prostate cancer in men is the BRCA 1 gene. This level of inheritance is in 5-10% of people. The reason BRCA 1 can cause cancer is because of its function, or lack of functioning for a better term. BRCA 1 repairs DNA and can destroy malignant cells if DNA cannot be repaired. However, if the BRCA 1 gene is damaged, the possibility of cancer can rise up to 87% in women by the age of 70 because the gene can no longer repair DNA. This DNA becomes malignant since nothing is stopping it from mutating. DNA is a lot like a computer. If there is no anti-software (BRCA 1), viruses are much more likely in a computer and these viruses have the potential to destroy the inter-workings of the computer. In this case, cancer is rampant in women who have this gene. 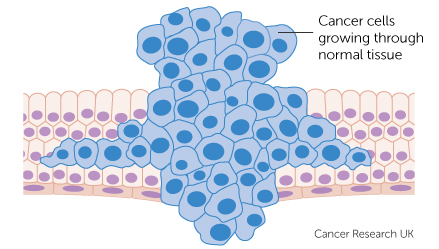 A few other examples of genetic problems that lead to cancer is certain damaging habits. Smoking cigarettes in particular is a sure shot way of increasing the likelihood for cancer. An interesting find from British researchers revealed that a mutation occurs in our DNA per 15 cigarettes smoked. People that are smoking a pack of cigarettes a day are essentially mutating their DNA in that same day. As we discussed earlier, mutations in DNA is what cause cells to go haywire and multiply without any control. Other daily habits that can cause cancer include getting a root canal, eating synthetic foods (sweeteners), drinking fluoridated water, and even chronic stress!

It seems that there are so many ways to get cancer, so how can we protect ourselves? It's important to understand the genetic family tree and see how many people in the family are genetically predisposed to developing cancer. Also, be aware of the things you can control. For example, smoking is seriously harmful to health. Taking the extra steps to stop will potentially save years of life. Being proactive about what certain cancers keep popping up can go a long way in living a long, healthier lifestyle. Keep this in mind when you think about picking up that next cigarette or drinking that "synthetic" coffee.

http://www.cancercenter.com/what-is-cancer/
Posted by Unknown at 11:40 PM