Geneticist Luis Barrerio conducted a study in which blood was collected from 80 people of African descent and 95 people of European descent. From these blood samples, macrophages were isolated, grown, then infected with two types of bacteria. While monitoring how the macrophages reacted to the bacteria three times faster than the macrophages from those with European descent. Researchers believe this is due to the first Homo Sapiens leaving Africa and migrating to European countries where they mated with Neandertals and adapted some of the immune responses of Neandertals in order to fight off infections they had not before encountered. A second study done in France collected two hundred samples of blood from citizens of Belgium, half of whom were of African descent and half European. In this study monocytes were isolated, grown, and infected with bacteria and viruses. The two groups showed very different immune responses again, with Neandertal-like gene variants in the European group played a major role in altering their immune response. 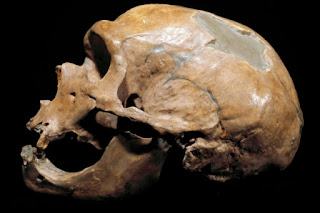 The change in immune response that those of European descent obtained can not yet be tracked back to the specific outbreak, but it is known that Neandertal DNA helped those of European descent survive tuberculosis due to the lowered immune response. The overactive immune systems of people of African descent can provide an explanation for why African Americans are at a much greater risk for autoimmune diseases when compared to white Americans. This research shows the need for more radical diversity in genetic studies since 80% of participants in genome-wide association studies are of European descent.
Posted by Emily Casey at 7:24 PM